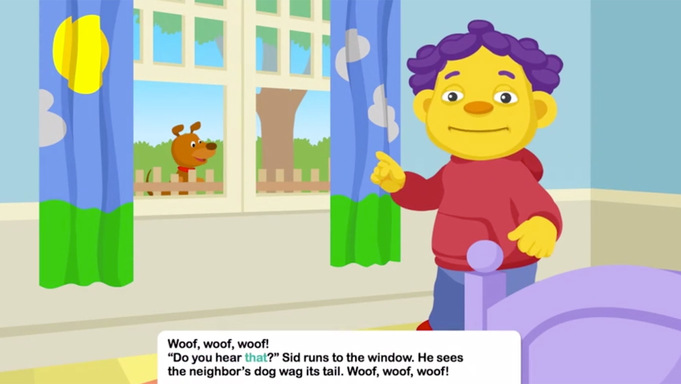 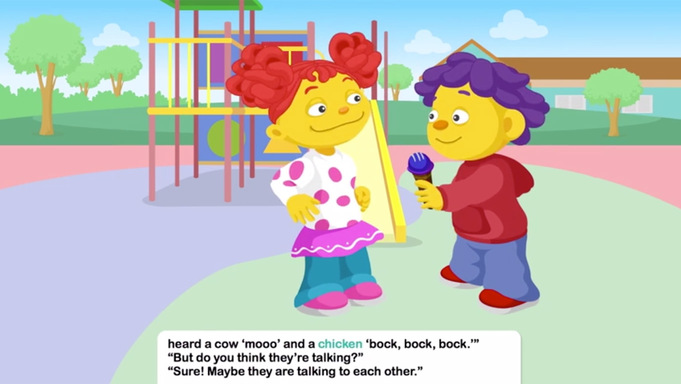 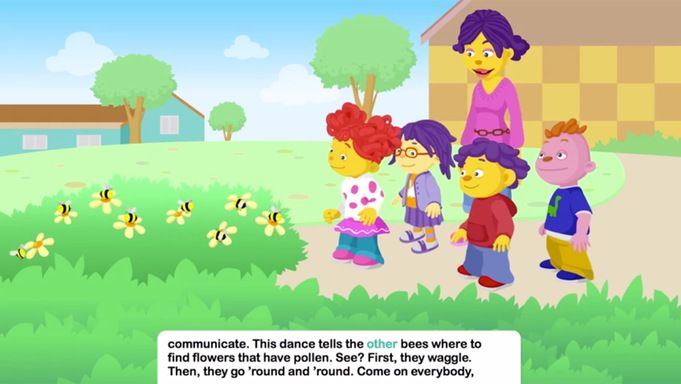 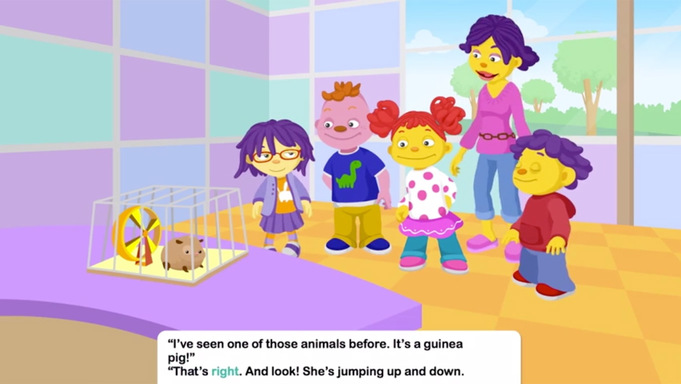 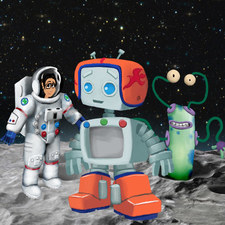 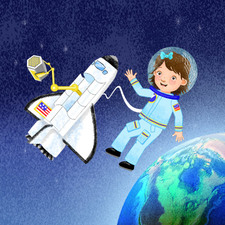 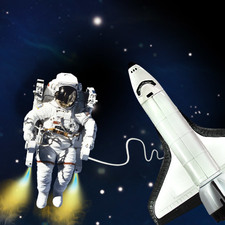 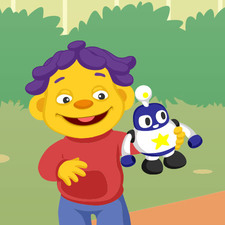 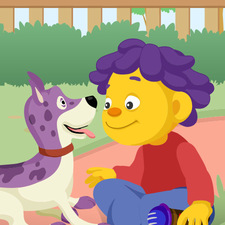 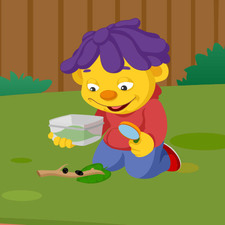 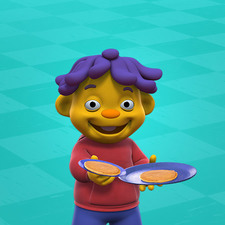 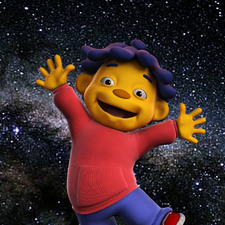 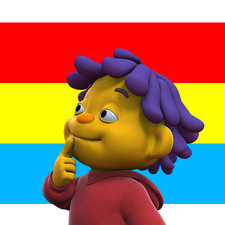 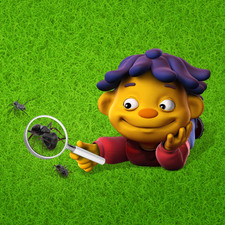 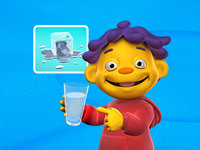 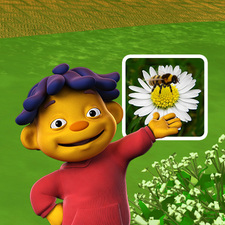 One membership, two learning apps for ages 2-8.
TRY IT FOR FREE
Full Text
Woof, woof, woof! “Do you hear that?” Sid runs to the window. He sees the neighbor’s dog wag its tail. Woof, woof, woof! “It’s a dog! What’s that, doggie? Are you trying to tell me something?” Woof, woof, woof! “Do you want to play with me?” Woof, woof, woof! “Hmm. I don’t know what his woofs mean, but he sure has a lot to say. It almost sounds like he’s talking. What do you think? Can animals talk?” “Hey, Mom! Do you hear the neighbor’s dog out in the yard?” “I hear a lot of barking, that’s for sure,” says Mom. “Do you think animals talk?” “Let’s look up some animal sounds on the computer.” They listen to the sounds of a dolphin, a penguin, and an elephant. “Hmmm. All those animals are making different sounds. But are they talking?” “Why don’t you ask your friends at school what they think?” “Now it’s time for the Sid Survey! Do you think animals can talk?” “Well, I don’t think they can talk like we do, but I have heard a cow ‘mooo’ and a chicken ‘bock, bock, bock.’” “But do you think they’re talking?” “Sure! Maybe they are talking to each other.” “May, do you think animals can talk?” “Well, I have a cat. When I pet her she says ‘purr, purr.’ I think she’s saying ‘I love you!’ I think, yes, animals can talk.” “What about you, Gerald, do you think animals can talk?” “I can speak dog. Wanna hear? ‘Woof, woof, woof.’ I think that means hello! I think animals can talk, for sure.” “Hmmm . . . Gabriela says cows and chickens talk. May says cats talk, and Gerald says dogs talk. What do you think?” Inside the classroom, Sid tells Teacher Susie, “I’m trying to find out if animals can talk.” “That’s a great question, Sid. Animals may not talk like we do, but they do communicate. They communicate by making sounds and moving their bodies. Let’s think of some examples. When gorillas move like this and beat their chests, they’re communicating that they are in charge.” “Like this! I am in charge!” “That’s right, May. Here’s another example. When lions roar a certain way, they’re letting other lions know where they are.” “ROAAAR! I’m right here!” “Teacher Susie, can we see some animals communicate?” Sid asks. “Of course! Let’s go outside to observe.” “Who can find an animal?” “Look, bees!” “Yes, Sid! How do you think these worker bees communicate?” “Well, they move around a lot.” “That’s true! The bees are doing the busy bee dance to communicate. This dance tells the other bees where to find flowers that have pollen. See? First, they waggle. Then, they go ’round and ’round. Come on everybody, let’s try it! First we waggle. Then we go ’round and ’round!” “See? They found the pollen to eat. Now, let’s observe the way other animals communicate. I have something special waiting for you in the . . . Super Fab Lab!” “Investigate! Explore! Discover!” “I brought a special friend to meet you. Does anyone know what animal this is?” “I’ve seen one of those animals before. It’s a guinea pig!” “That’s right. And look! She’s jumping up and down. That’s called popcorning. It probably means she’s very excited to see us!” “Well, I’m excited to see her. I’m going to jump up and down too!” “Me too!” “Me three!” “Wow! A guinea pig can tell us she’s happy just by jumping up and down! Animal communication is super cool because they don’t really talk, but they tell us stuff by making sounds and moving their bodies!” “You’ve all learned a lot about animal communication today. Now, think about other animals you know and how they communicate. Grab your journals and draw what you come up with.” Gerald thinks, then draws a rabbit. “I’ve seen rabbits jump up and down and kick their legs. I think that means they're happy. It’s like a rabbit is saying, ‘Hey, hey, life is great!’” Sid draws a peacock with its feathers spread out. “My dad told me they do that to get the attention of other peacocks. It’s like this peacock is saying, ‘Look at me! Look at me!’” When Sid arrives home from school, he sees the neighbor’s dog. “Hmm. He’s not barking, but look!” “Maybe that’s why he was barking this morning. He was trying to communicate that he was hungry! I like to tell everybody when I’m hungry too! Glad you got to eat, little buddy.” Woof, woof, woof! “Hey, where’s that bark coming from?” Sid turns to see Grandma’s new dog. “Hello, Philbert!” Woof, woof, woof! “Hi Grandma, did you know dogs can communicate?” “Ooh, communicate. That’s a great word, Sid. What do you think Philbert is trying to communicate?” “I think Philbert is barking to say hello.” Woof, woof, woof. “I also think Philbert is communicating that he’d like to spend the night.” “Well, if that’s what he’s communicating, it’s okay with me!” “When he wags his tail like that, I think he’s trying to tell us he’s happy. I’m happy too. See?” Sid takes Philbert up to his room. He reaches out to rub Philbert’s belly and hears Philbert panting. “Hmm. That sounds like communicating. What are you trying to say, Philbert?” “Oh, you want more belly rubs! Who’s a good boy? That’s it. You’re a good boy, Philbert!” Woof, woof, woof. Philbert licks Sid’s face and Sid laughs.
1